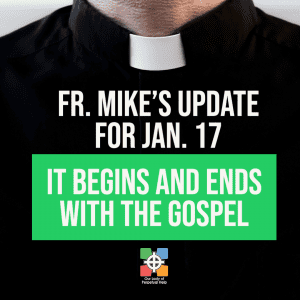 Then Eli understood that the Lord was calling the youth.
So he said to Samuel,
“Go to sleep, and if you are called, reply,
Speak, Lord, for your servant is listening.” -1 Samuel 3:8b-9

Young Samuel discerning the voice of God, with the help of his mentor and priest, Eli, teaches us that hearing our Heavenly Father’s voice and responding in kind requires time in prayer, active listening, affirmation, and encouragement from fellow wise and holy Christians.

Eager to please his teacher and not yet aware who was summoning him, Samuel rushes to the side of Eli each time he’s called. Tempering his eagerness, Eli tells Samuel to go back to bed. This advice rings true today; we should be ready to serve God, and at times, be willing to put aside some sleep to do so. Yet, when we are trying to isolate God’s voice, it’s essential not to neglect self-care so we can have a clear head. After several “trips back to bed,” Eli helps Samuel recognize that it’s indeed God’s voice, he hears and how to best act in response.

Before Samuel’s encounters, however, we hear about Eli’s sons, Hophni and Phinehas. Unlike Samuel, who is excited to serve his God in greater glory, Eli’s boys are only eager to extract the benefits of power and influence they have inherited. Ignoring their Dad’s rebukes, the two abuse their position as priests, stealing from offerings and behaving promiscuously. Scripture conveys the Lord’s subsequent anger, but the greater community’s perspective is missing from the Biblical account. So, let’s consider the full consequences; how did these Priests’ corruption potentially weaken the faith or shatter the trust of those God had put in their care? By not listening to the Lord’s call and rejecting a life of service to others, these two blessed with influence chose to sow disruption, division, and discord instead.

Currently, our nation faces division. Exacerbated by the pandemic and its effects, political extremists have shown a profound disregard for our democratic republic’s values. Respect for life is rarely shown, especially in those with whom they disagree. Rather than engaging in listening, discourse, and dialogue, social media is the platform of preference for the war they wage with the intent of gaining or maintaining power by force. These antics have sown as the latest source of worry and disruption among families and between neighbors.

I am not alone in asking myself, where did these voices of division originate? What drives their anger and hatred that seemingly threatens a civil war? I have yet to uncover a complete answer. I am deeply concerned and recognize that the latest news causes shockwaves among our parishioners and neighbors. However, the story of Eli and Samuel reminds me to stop and ask my God, “Lord, how might you be calling me to respond?” – just as I encourage you to ask yourself this very same question.

I have been interested in the clergy’s roles and response to the atrocities of World War II from my time studying at the seminary, including my diaconate thesis. The history is muddled at best, but a question often posed is this: was Pope Pius XII too timid in response to the purge of human life as a result of the Holocaust and the ideologies that fueled fascism? Was his perceived silence that of prudence, as he worked covertly to save the lives that he was able? I realize I am no Pope, and I certainly do not envy decisions such as these.

So, then I remember the many parish priests and religious who gave themselves heroically and died while imprisoned at concentration camps for further reflection. As Catholics, we need to look no further than the inspiring witness from Saints Maximillian Kolbe and Theresa Benedicta of the Cross (also known by her birth name of Edith Stein) who gave their lives at Auschwitz. It’s important to recognize some 2,579 Catholic priests, monks, and seminarians; political dissidents from all over Europe found themselves prisoners at Dachau. This infamous Nazi-run barrack, coined the “priest barracks” by historians because it exclusively housed the clergy. First-person narratives tell us that these prisoners were perceived to benefit from “special” treatment.” When in reality, their captors sought to sow discord among them with this dubious claim. A standard tactic among the Nazis was to offer freedom to any priest who promised to renounce his priesthood. After their release, diaries reveal many clerical prisoners found their faith deepened after surviving Dachau. While imprisoned, they contemplated their faith and relationship with the Lord in a more profound way. These experiences bore great fruit, such as the restoration of the diaconate in the Church and many former prisoners became bishops, with a few collaborating in the Second Vatican Council. A decade later, that very Council would affirm the Church’s need for global involvement while cultivating a sensitive ear to future threatening currents against humanity.

Though, I am not in a position to judge the souls of President Trump nor President-Elect Biden. Neither Republican or Democratic platforms are all-encompassing of the Gospel message. Still, lifting our nation in prayer and greeting others with compassion is essential. However, I am deeply concerned about the political positions that are argued and that have taken root in our culture. But I have not found the way that I can change minds and hearts that directly affect the contentious situation.

Take heart; productive leaders are encouraged to consider their “Circle of Influence” when confronted with what seems like an impossible challenge. The process shifts our concern away from broader areas that typically contain elements not of our control to our immediate hemisphere to affect positive change. With that approach in mind, my “Circle of Influence” is often similar to Eli’s role. With great joy, I encourage parishioners to start or maintain a prayer life, learn how to recognize God’s voice, and accept and respond in faith to what our Lord is asking. By bringing our focus back to Christ, I’m confident that the formation of faithful disciples who recognize Jesus’ voice and become exemplars of virtue is the solution to any challenge, no matter how grave! As Christians and Catholics, we will not likely succeed in a culture that upholds all life’s dignity if we wait for its legislated enforcement. The culture of life must begin in our homes and at the parish level. And this call to action should always begin and end with the Gospel. We must continue to ask the Lord how he’s calling us to go BEYOND. In OLPH’s ever-widening circle of influence, let’s ask ourselves, how might we improve upon our efforts to care for our parishioners and neighbors while striving to be authentic witnesses to Christ? Please take this question to prayer and share your inspirations directly with me at MTriplett@archbalt.org. With the inauguration of President-Elect Joe Biden, the transfer of our government will occur Wednesday, January 20. When then a fledgling nation, our first bishop, Archbishop Carroll, composed a prayer to the nation, which I encourage you to make your own. The US Bishops have likewise compiled and posted Prayers for Peace, which are most appropriate. Won’t you join me as we make these prayers our own and lift up our country, our president, and all our leaders for God’s protection and guidance?

Some of the key considerations for this week.

▪ Building a culture of life begins with the personal decision and commitment to valuing and respecting all life. As we remember the loss of millions of unborn babies, I encourage you to participate in prayer and fasting as a family.

▫ Thursday, January 21 to Friday, January 29 has been set aside by the US Bishops to pray for the protection of human life. The Respect Life office has put together a beautiful novena that I encourage parishioners and families to pray each day. Download the pdf for the full novena, 9 Days for Life, or visit the Respect Life page for the daily prayers or to sign up to receive them daily.

▫ Friday, January 22, marks the anniversary of the Supreme Court’s Roe v. Wade decision in 1973. The US Bishops have set aside this day as a particular day of prayer and penance. Our 8:15 am Mass in the Church and livestreamed will follow the “Mass for Giving Thanks to God for the Gift of Human Life.” Likewise, we will set aside Friday at 7 pm as a time for prayer together as a parish, both in the Church and livestreamed with adoration.

▫ The Archdiocese of Baltimore has put together a series of events for the week of January 24 to encourage safe participation for all parishioners. Check out the full slate of events here, that starts with a “Life is Beautiful Mass” celebrated by Archbishop Lori and livestreamed on Sunday, January 24 at 10:45 am and encouraging virtual participation in the March for Life.

▪ Our partners ChristLife are currently undergoing a $75,000 fundraising campaign, and for each dollar raised, they have a matching donor. Please consider becoming a supporter of their ministry directly, here, and pray for our parishioners who have just begun the Discovering Christ series this past week through OLPH online.