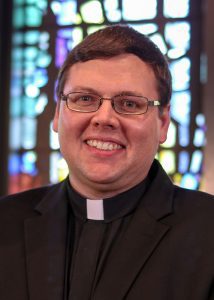 Father Rob Katafiasz (pronounced Cat-uh-FI-ez), a Pasadena MD native–followed a tech-prep track through Northeast High School, and then Anne Arundel Community College. Before seriously discerning the priesthood, he worked as an industrial cleaner for five years, which left him time for little else, with a work schedule that required him to be on call 24/7.  He would later become the maintenance man of his home parish, St. Jane Frances de Chantal in Pasadena, which afforded him more time to begin seriously exploring religious orders.

Father Rob went on to receive his Bachelor’s Degree in Philosophy from Mount St. Mary’s University and a Master’s Degree in Divinity from Mount St. Mary’s Seminary. He had the privilege of completing his Pastoral years at St. Mark of Fallston and St. Louis in Clarksville and went on to serve as a transitional deacon for six months at our own OLPH.

What do you love best about OLPH?

OLPH is the first place people have called me ‘Father.’  I have always felt called to be a father, though I thought that I was called to natural fatherhood. Because of God’s call and confirmation through the Church as well as Archbishop Lori’s evoking the Holy Spirit at my ordination Mass on Dec. 15th, 2018, I am now a spiritual father to OLPH. It is one of my greatest joys to be a father to all who call OLPH home!

His father regularly took him to the annual conference sponsored by the Catholic Men’s Fellowship of Maryland; was in “Disciples of Mission,” an evangelization program with older adults, when he began volunteering with his parish’s youth ministry; credits Father Brian Nolan, a former parish priest at St. Jane Frances, for influencing his vocation; began his discernment with the Capuchin Franciscans.

Likes:
0
Phone
410-747-4334
Email
rob.katafiasz@archbalt.org
Categories:
Associate Pastor, OLPH Staff
Previous Profile LinkLisa SlikerNext Profile LinkSr. Lorraine McGraw
We use cookies to ensure that we give you the best experience on our website. If you continue to use this site we will assume that you are happy with it.Ok