God Had Other Plans for Me

The definition of Adoration is deep love and respect, worship, and veneration. God instills in us the ability to adore Him, but sadly only 9% of all Catholics believe in His true presence. Despite this, Jesus/God is always calling us to Him.

The process of this calling of Christ can be quick, or it may take some time. As for me, it took a lot of time, but it was well worth it. As a non-Catholic, rebellious teen in the 60’s, with the depression era World War II vet father, we were two worlds trying to occupy the same space. God had other plans for me. Despite our differences, God would take us fishing every week. With few words said between us (and even fewer fish caught) God brought us to this quiet time for my dad and me, and over time our love for each other grew. In an odd way, it was God adoring us to show me how to love Him.

As I sit before the Eucharist, Jesus is calling me to rest with Him in that quiet place (Mk 6:30-31). Getting to know Jesus in Adoration brought me to the point that Simon Peter experienced at Caesarea Philippi (Mt 16:13-17). Adoration becomes that safe place Jesus takes us to learn to know Him and gives us confidence in His love for us as we grow more and more in love with Him. We may never know how to express that Agape love for Him, but Adoration allows you and me to experience that Agape love He has for us.

What effect has twenty-plus years of Adoration had on OLPH?

I am reminded of Matthew 5: 13-16 “You are the salt of the earth…. You are the light of the world. A city set on a hill cannot be hidden. Nor do men light a lamp and put itunder a bushel, but on a stand, and it gives light to all in the house. Let your light shine before men, that they may see your good works and give glory to your Father who is in Heaven.” In the 22 years, our parish has had Eucharistic Adoration, we have experienced a metanoia, a beautiful blooming of souls. We have changed. Our personal lights have toppled over countless bushels so that they might shine more brightly. We have over the years seen an incredible opening to the workings and promptings of the Holy Spirit among our faithful. Our parish has become alive. Our faith has moved from our heads to our hearts. We have become salt and light, serving and loving each other as family and reaching out beyond our parish to those in need. We can only imagine what kind of fruit will be born from more hours of Eucharistic Adoration in the years to come.

What can coming to Adoration do for you personally? The same thing. Transformation. Come to Jesus in the Eucharist in Adoration. He is calling you to enter the chapel where He waits for you. Are you worried about family members? Bring their intentions to Jesus in the Eucharist and release your worries to Him. Are you exhausted? Are you weary? Come and rest a while with the God Who Loves you more than you can imagine. Are you troubled with anxieties, worries, fears, or sadness? Come to sit with the King of Love and let Him do His work in you. Give Him those anxieties, worries, and fears, and let Him transform you. Let Him fill you with deep newfound trust, hope, surrender, and peace. He wants your burdens. He wants to transform your heart. Are you tired of the endless noise of the world? Here in the chapel, silence reigns. Let Him draw you into the silence, into His Healing, into His intimate Love. He waits for you.

Alisa White entered the Religious Sisters of Mercy of Alma, Michigan as a postulant. Now, known as Sister Thomas Miriam, she welcomes your continued prayers as she moves forward in formation and she too, promises to continue praying for us!

Before entering religious life, Sister Thomas Miriam spent many consecutive days before the Blessed Sacrament reading God’s word, learning to listen to His voice, and falling deeply in love with Jesus while praying in our Chapel dedicated to vocations. 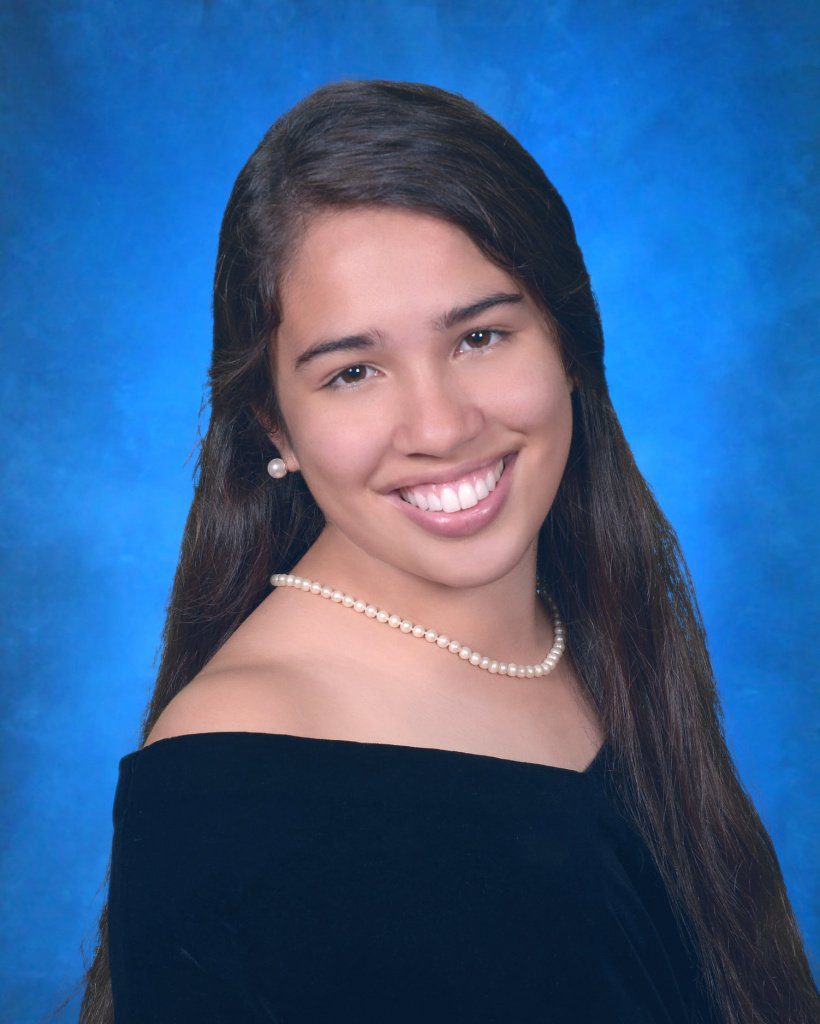 “Just hearing people talk about the Sisters makes your face glow,” Fr. John Rapisarda once told me, and I could feel my face glowing as he said it. Ever since first meeting the Sisters from Mount de Sales in eighth grade, I had longed to become a Nashville Dominican, because I wanted to be as irrepressibly joyful as they are – but I knew that something was missing in my love for my vocation: I wanted the vocation more than I wanted Jesus. Then one day I was sitting in Mr. Dubyoski’s junior religion class at Mount DeSales Academy (MDSA) when my friend told me these words spoken by Jesus to St. Teresa of Avila: “I count down your steps as you come to the chapel.” “Can’t you just see Him doing that?” my friend cried. “Counting down and being so excited as you get closer and closer, and then being like, ‘Oh! She made it!’ when you get there?” My heart just caved in. It felt as if Jesus had sent an arrow of love flying right through me. That afternoon, driving down Thistle Road on my way home from school, I found myself turning into OLPH and imagined Him counting down my steps as I hurried through the doors – He was waiting for me! waiting to be my Best Friend…

I returned the next day. And the next. My time with Him quickly grew longer and deeper; at times I forgot everything else in His Presence and was simply lost in His gaze. And from then on it became impossible for me to drive by that little Adoration chapel, knowing He was counting down the seconds and steps until I reached Him. There in the silence of that calm, inviting home of my Jesus, I fell in love with the Son of God. My vocation was no longer about feeling the contagious joy of the Sisters; it was about laying down my life, my heart, my everything for the One I love most. In gazing into the eyes of my Creator, I found the meaning of my life, and it was nothing less than to live, die, and live again for Him – to be a saint, and not to do it halfway. I can’t say it was always easy knowing He was calling me: sometimes I fretted that He wanted something else of me, other times I told myself being a sister would be boring and then all kinds of wild desires would crop up – to see the world, to speak other languages, etc. But God knows our desires, thankfully. These faded, and it was a huge day when I met the vocation director early senior year.

Everything was moving toward my great dream of entering the convent right out of high school; then, on Holy Thursday, the vocation director said that while she believed I was called to the community, I should go to college for a year first. It suffices to say I suffered very much with Jesus during that Triduum. Again I fled to the church, laying my cross before the Tabernacle. But as He always does when we let Him, He used my pain to transform me into a person so free, so trusting, so childlike in my utter surrender to Him that I hardly recognized myself. “Lord,” I begged Him over and over again, “I can’t tell You that I’ll do whatever You want, because I no longer have any idea what You want. You, then, do whatever You want with me. Let it be done unto me.” And what did He do with me?

Four days later, on Easter Monday, my grandparents called and offered to send me to a Catholic university in Spain, where over a year-long program I would learn almost-fluent Spanish. Needless to say, I’m writing this testimony from Spain. And as Spain just so happens to be the homeland of St. Dominic, I wrote my application to the Dominicans at the place where he was born, which gives me bragging rights for the rest of my life. On January 13, I was accepted into the Order and will be entering in August. Sometimes I think about all the people driving down Ilchester Road with all their worries and burdens whirling through their minds, passing right by our Adoration chapel without ever stopping to think that their Savior and their God, the solution to all their problems, waits for them inside. And we, who knows – what if we really believed? What would change if we believed, with all our hearts, that God Himself rests in that golden monstrance? I’m not sure we would be able to leave the chapel. My younger brother once asked me, “When you go into a church, don’t you feel – lots? Like lots is there?” Then after a moment of thought, he added, “Like everything is there?” Yes, everything, going by the Name of Jesus, is there – right inside our little chapel!! And just like the rays of the sun, He changes us when we simply rest in His Presence. Having been raised in a faithful Catholic family, homeschooled, and a student at MDSA, I can tell you right away that it was Jesus Himself in that monstrance, shaped like a flame, Who set my heart on fire. It was He Who pointed out the path that would most fulfill me, He Who comforted me when His Will was difficult, and He Who gave me strength to carry it out. All that we do, struggling to grow in holiness and virtue, pales in comparison to what He does when we even fall asleep in Adoration. Please, let’s not keep driving by Him! Finally, to those of you young people whose insides are doing nervous somersaults as you read this vocation story, please don’t be afraid! If God is truly calling you, it will be the deepest romance and most unpredictable adventure you could ever experience. He is Love itself and He can do anything: think out for yourself the result of that combination. In the words of St. Therese, “What earthly lover, however powerful, could make snow fall from the sky to charm his beloved?”

But You, Jesus, You can…

We use cookies to ensure that we give you the best experience on our website. If you continue to use this site we will assume that you are happy with it.Ok